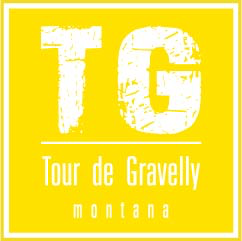 Okay, we got our first five done.  We're growing, getting good at this, and we are definitely onto something big. The net gain on this route is over 6,000 feet. That's one hell of an uphill. The net drop is over 4,800 feet so after a huge uphill you get a white-knuckle downhill.

There are a choice of two routes for the Tour de Gravelly. These are ‘The Beast’ which is the original route of the first four years, and ‘The Animal’ which is about 20 miles shorter than the original but also goes up and over the Gravelly Range Road. Both races start at the same time and at the same place (6:30 AM at Lion’s Club Park in Ennis). Both races have the same finish line (Vigilante Station in the Ruby Valley). The routes are the same for the first 28 or so miles. The net elevation gain for The Beast is just over 6,000 feet. The net gain for The Animal is probably closer to 5,000 feet net gain though this has not yet been adequately measured nor has the total mileage – 35 miles is an estimate at this time.

If you’re the type of cyclists that needs a very defined and detailed agenda as well as support crews, this might not yet be the race for you (it probably never will be). We’re just in year five and are still working things out. But if you want to join the fun and break some new ground with us, please do. The more, the merrier.